WordPress 5.0 Review: What’s New? Should You Upgrade or Wait?

Guys, it’s happening. Finally, WordPress 5.0 is live for everyone. You might be wondering “What’s new in WordPress 5?”. Well, there are a lot of new features.

WordPress is the most popular and most used website builder out there. WordPress is going through some major changes. Gutenberg is the future of WordPress, and it is releasing today on 6th of December 2018. it replaces the classic WordPress editor with a new block-based visual user interface. WordPress creator, Matt Mullenweg announced WordPress 5.0 plans back in October.

Gutenberg brings a complete makeover to the traditional WordPress classic editor, known and used by all today. Matt tweeted about the “sitting back and watching the download counter”

What is Gutenberg WordPress Editor? What’s New in WordPress 5?

Gutenberg is the new editor that aims to replace the classical TinyMCE editor that has been used in WordPress so long. Gutenberg is a client-side interface built up from the ground up with React JS Library. It uses a block-based system for content creation.

Theme developers will not need to bundle other plugins and page builders like Elementor from now on. They can build blocks for Gutenberg and users can use the blocks to create beautiful pages.

Core developers will be able to work in modern technologies and not worry about 15 years of backwards compatibility. We’ll be able to simplify how menus, widgets, and the editor work to use a common set of code and concepts. The interface will be instantly responsive.

WordPress 5.0 was supposed to follow the following release schedule. However, due to several setbacks, WordPress 5.0 was pushed back to December 6, 2018. The WordPress team proudly unveiled the new version of WordPress at WordCamp, US 2018.

How to Install Gutenberg?

Gutenberg has much more writing space the classic editor has. However, one major flaw is that you do not get a continuous “writing first” space as the writing space are now defined by blocks. Gutenberg ditches TinyMCE Toolbar and now it iss now replaced with a drop-down menu. When you click on the “Insert” button, it will add new paragraph blocks.

Matt Mullenweg had to say the following about WordPress 5

“What we’re trying to do is shift it so that you only have to learn about blocks once, and once you learn about the image block, that can be in a post, in a sidebar, in a page, in a custom post type, and it will work the same way. Whatever is integrated with it, let’s say a plugin that brings in your Google Photos or your Dropbox, that will now work everywhere, too.” — Matt Mullenweg

There are a few new block additions we thought were pretty cool.

Although the focus is on Gutenberg, WordPress 5 adds a new theme named “Twenty Nineteen”. The theme is fully supported by Gutenberg.

Tables are much easier to add now as you can add them as blocks within the Gutenberg editor. Previously you had to use a 3rd party plugin or HTML code. However, now you can add tables from the visual editor.

Gutenberg has also added the facility to add responsive text column blocks, which is pretty neat! Now, you can decide between a 2, 3, and 4 column layout.

Gutenberg has also a new feature, naming live HTML block. You can add your code and then see a preview of that HTML code right within the block. This is an excellent idea and might stop some of us from having to switch between the visual editor and text editor.

You can now drag and drop new directly to your post via an image block like before.

You can add custom CSS classes to individual blocks.

One of the new blocks is Recent Blocks. Recent Blocks shows a list of your most recent blocks so you can quickly add them. 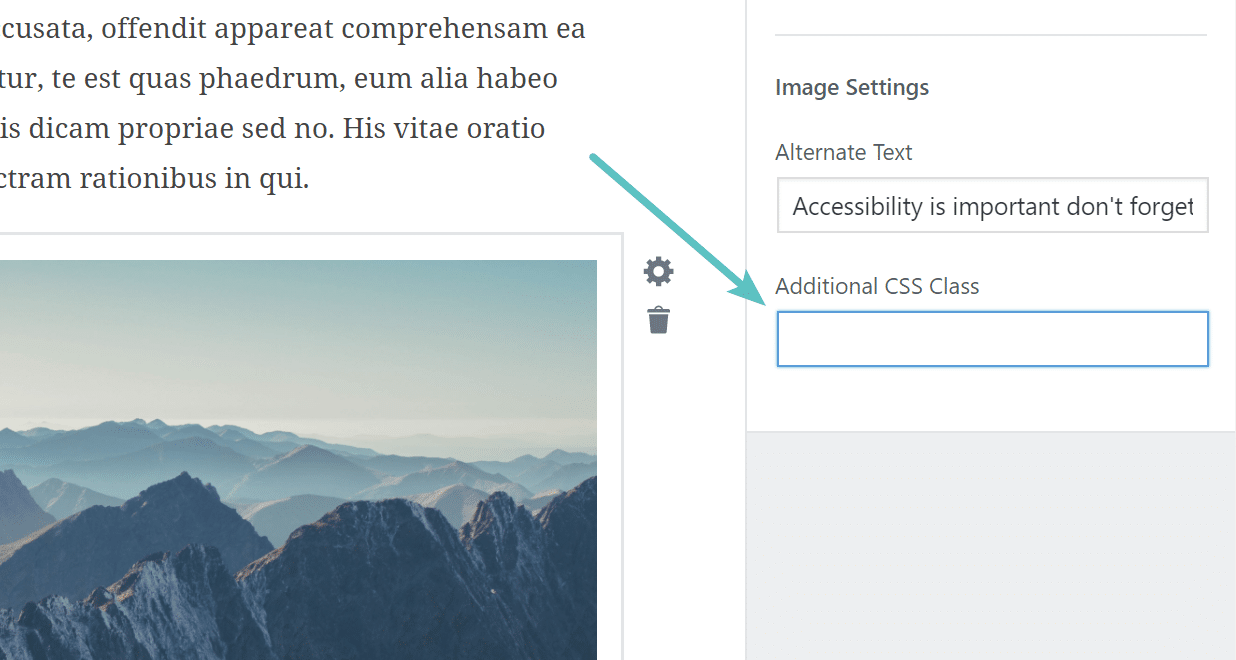 A handy feature is slashed autocompleting. You type slash and Gutenberg will suggest commands. Having the option to use the keyboard is always welcome.

Gutenberg added some new visual styles and options for cover text. You can quickly change the font size, make it into a Drop Cap, and alter the color

Table of Contents and Anchor Support

Gutenberg has also added a Table of Contents on the sidebar. They are clickable links so you can quickly jump to sections of your article. This can be very helpful for long-form content. 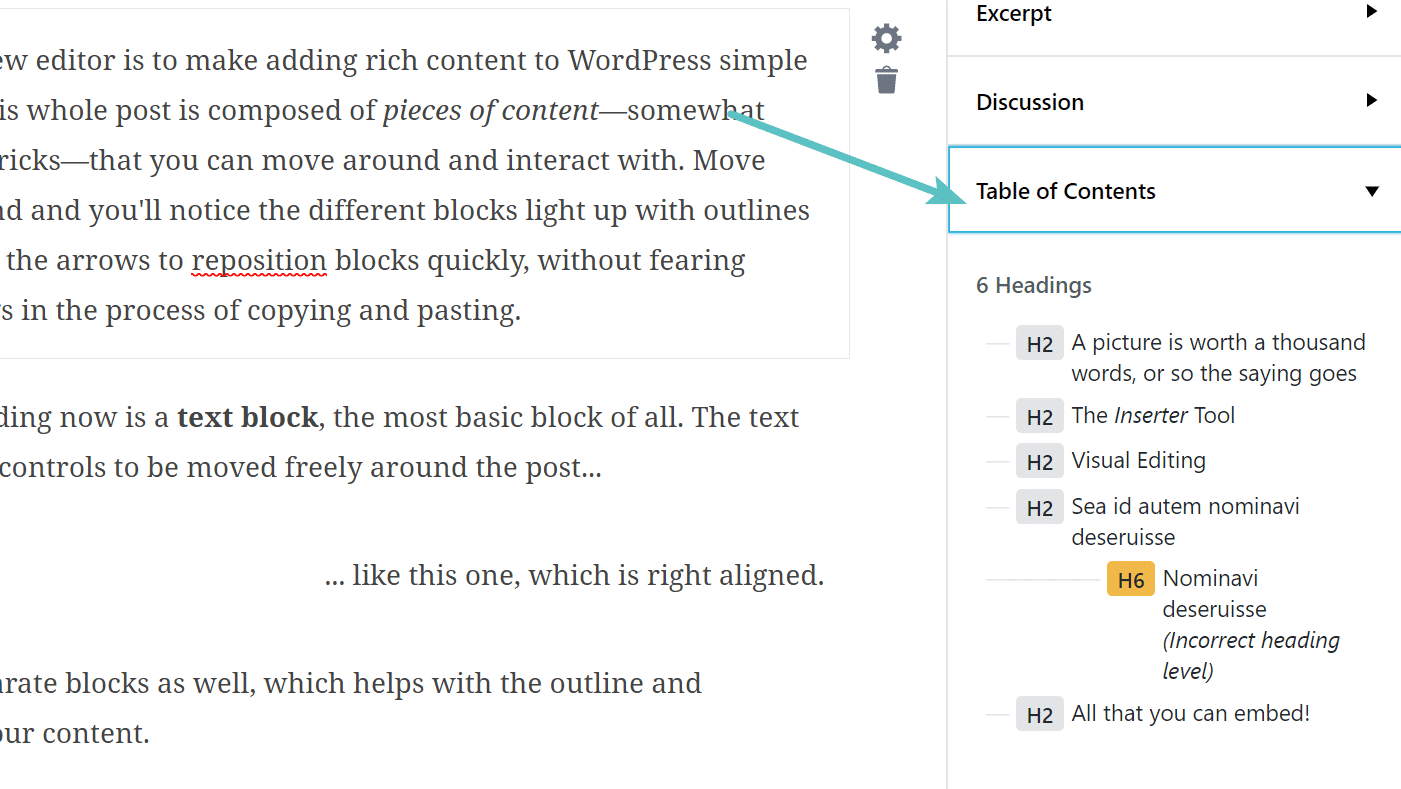 Gutenberg is also adding by-default support for Anchors. As we described before, adding a new anchor wasn’t easy without plugins. Until now, either you had to use a plugin or had to do it manually. But Gutenberg is handling it on its own. 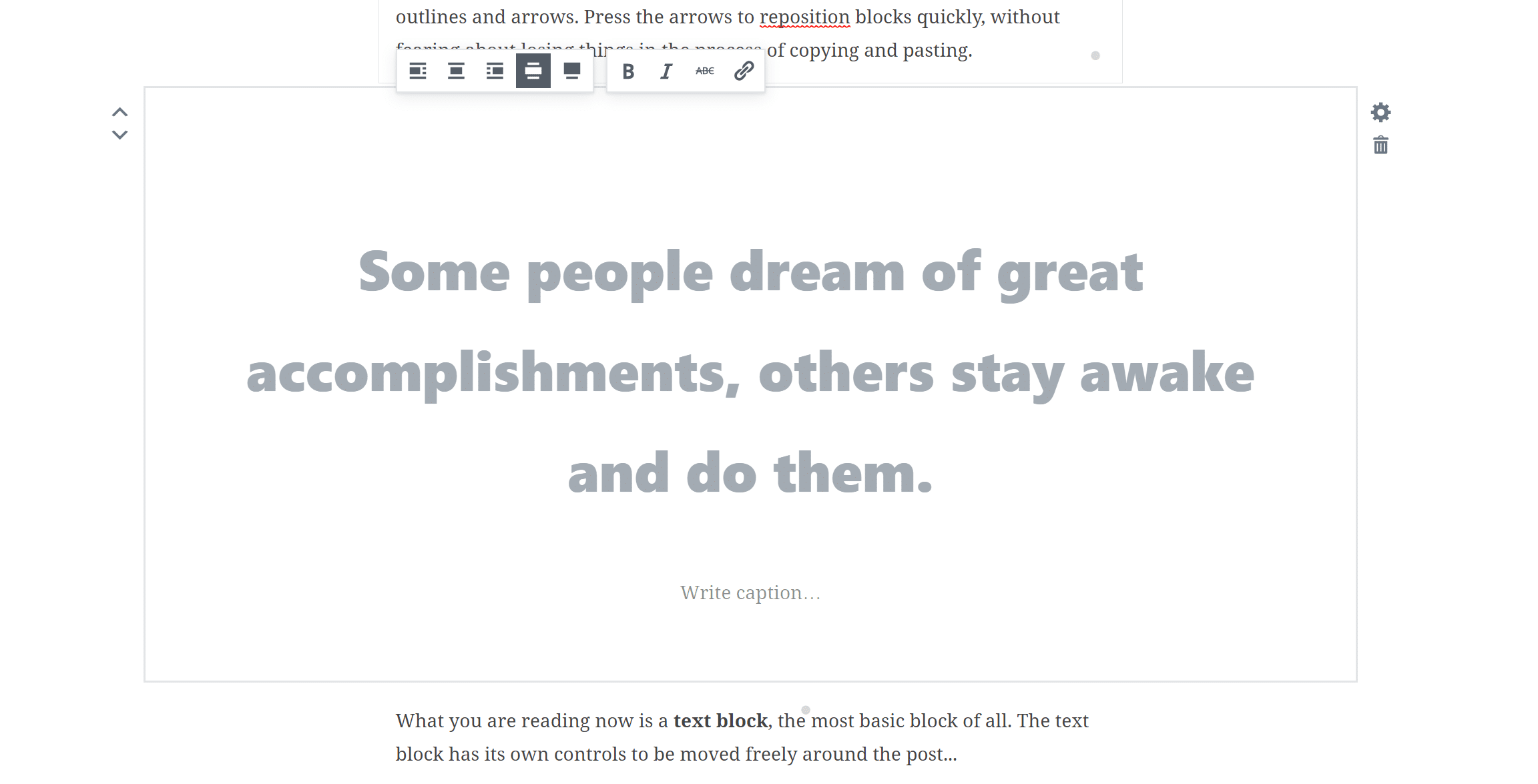 Besides the standard blockquote which has been shipping for WordPress for years, Gutenberg has added support for a new Pull Quote. Pull quotes are different from regular block quotes. Until now, the standard visual editor has given users the ability to align left, align center, align right, and assign no alignment. However, now with the Gutenberg WordPress editor, you can also align wide (as seen below), and align full-width.

Word and Block Counts in Guttenberg

Another nifty feature is Word and Block Counts. As the name suggests, it shows words and block counts.

How to use Buttons in Gutenberg

We all had to use third party software to use buttons. Not anymore, cause there is also a built-in method for adding a simple switch. The buttons are basic but, hey! it’s quite nice that one does not need to add plugins for simple buttons.

Conclusion – Should I Upgrade to WordPress 5.0?

We suggest not to upgrade right now on your production server/live server. Wait for a while because many plugins still do not have support for Gutenberg. Our recent coverage of 21 Best WordPress Plugins also does not ensure 100% compatibility.

However, if you don’t mind tinkering with new product and it doesn’t matter if there are some errors, go ahead and try WordPress 5.0 Gutenberg.

Let us end the article by answering some of the most popular questions about WordPress 5.0 Gutenberg

The most notable feature is Gutenberg of course. There is a new theme named Twenty Nineteen that is accompanying Gutenberg blocks. However, there are other underlying changes too. You can check the changelog of 5.0 for detailed change history.

3. Who is ready for the new Gutenberg WordPress visual editor?

Ans: Well, we have been preparing for it quite a while. At WPHive, we are ready for it. Although, there’s also some resistance from veteran WordPress users. However, we hope everything goes better with time. Some of the Classic Editor fans even started their new venture ClassicPress which makes use of the old editor.

4.  What do you think about the Gutenberg, the new block editor which will soon appear as part of WordPress in the context of potential conflicts with existing premium plugins likes Visual Composer, Elementor, Beaver Builder and many others?

Well, we love Elementor as it helps to make the whole website in less time. Also, there are some Elementor Add-ons available, which makes it a great choice for anyone.

However, now WordPress 5.0 supports it by default. Only time will tell how developers and users accept Gutenberg. Likewise, we are positive about Gutenberg as of yet.

As you can see, the reviews of WordPress Gutenberg on the plugin directory have not been very well until now.

5. Will all my plugins or themes work with WordPress 5.0?

Product Manager by passion & profession. Lead Product Manager at weDevs, former PM @ Poptin. Passionate about writing & tech. He's an advocate of Human-Centered Design and believes that websites and the tools used to build them should be well crafted, intuitive, and accessible. Cyclist. Reader. A WordPress ninja 🥷, HCI expert & a design thinker 💡

[Step by Step] How to Upload New Themes to WordPress

8 replies on “WordPress 5.0 Review: What’s New? Should You Upgrade or Wait?”

I think gutenburg is disaster to wordpress. to create a post we require more time and effort. Especially too much clicks!!

Yeah, that we agree! But the concept is quite well.

Very poor experience with new wordpress editor 5.0. It completely lost the ease of publishing and editing articles. I rate 0/5 to werdpress 5.0 update.

True that. WordPress 5 Gutenberg editor has made it tough to write contents with ease. You can always use the Classic Editor plugin to revert back to the old editor.

Yeah, Worpdress New version is very poor performance. More issues editing and as well as Designs. Need to be update or fixing.
Thanks.

Yes there are still some bugs with Gutenberg. However, they will improve with time too.

You are the best Saif Hasan…Thanks for help.

Glad you liked it.